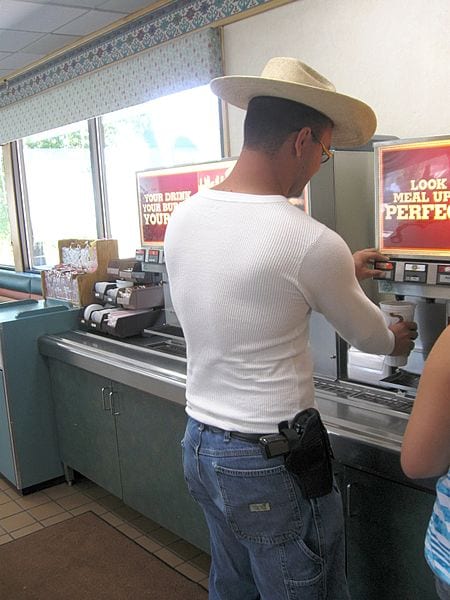 In the United States only 8 states remain to date that do not allow open carry. Florida, is one of few remaining states in which continue to discourage and not permit open carry. However, recently State Rep. Matt Gaetz, R-Fort Walton Beach has proposed a bill that would enact all Florida residents with a concealed carry permit to automatically be eligible for open carry. During a press conference, Gaetz indicated to the public statistical references that reflect potential decrease of upwards of 20% in states in which currently permit open carry. As of 6-October-15, an open house-committee voted on passing the bill, and it will now be processed to other house committees approval for surrounding jurisdiction.

Gaetz pointed towards a UCR (Uniformed Crime Reports) statistic by the Department of Justice from 2012 to justify his claim, pointing to a 23% lower reporting of violence crime by the states in which currently permit open carry. Violent crimes in this instance are otherwise reported as crimes involving robbery, assault, forcible rape, and murder by the Uniformed Crime Reporting system. The statistics examined and represent the reporting of each 42 states, violent crimes per 100,000 citizens. This is however likely to be an arbitrary standpoint, since it does not define or differentiate it’s relationship with concealed-weapon crime-recidivism, nor it’s previous, post, or future projects of likelihood to commit violent crimes in states that allow open carry versus concealed carry states. The fact that states with-open carry laws had lower reporting of violent crime does not necessarily take into account by any means all possible influencing variables. Also, these statistics do not appear to reliably indicate increases in crimes directly associated with disputes turned violent due to the allowance of open carry, for example.

There are too many variables to take into consideration directly pertaining to open carry, it’s influence per state, and what sort of (positive) developmental changes said open carry laws might offer the general public to make responsible statements or projections regarding these statistics. For example, to-date some state(s) still allow the carrying of a firearm without a permit. This is very unique, and as such each of the 42 states recorded for this research also are unique in their own ways. Factors such as population density, class, average age, geographic, and demographics are equally play roles in determining the explanation of why some places have more crimes than others, and the facts in which influence or otherwise enforce a more safe and positive state for the general public.

Professional researchers and scientists from both Florida State University and John Hopkins University department of Criminology indicated that this statistic is very broad, and in the sense of application here is impractical. It would be required to conduct a longitudinal survey to obtain more realistically accurate statistics reflecting the increase or decrease of violent crimes in the United States. Additionally, other variables would have to be taken into consideration, such as probable progression with or without said laws being applied, as well as any other underlying factors as mentioned previously. Without this information, it’s nearly impossible to responsibly draw conclusions regarding open carry, concealed carry, and their effects on criminal recidivism.