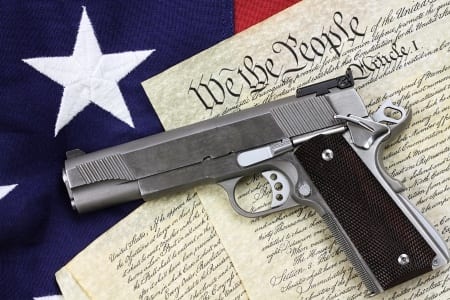 Bob Smith is facing threat over his life as a man with knife approaches him. He thinks about getting murdered anytime and opts to not run away. Taking a gun out his waistband, he blows away the perpetrator. It may sound like some clear cut case of justified application of force. In Florida, Bob decided for standing his ground but there is a problem. He falls in the category of convicted felons and is not allowed to possess firearm legally.

Durell Peaden, the former senator of Florida State sponsored the main legislation of stand your ground in 2005. He argues that provided any convicted felon loses the right for possessing arms, he or she shouldn’t have similar protection as the law abiding citizen. Many people of Florida advocate the theory of Peaden.

The apex court at Florida will address the unresolved issue of past. It is reassessing a case which took place in Palm Beach County. Here in this case, 25 years old cocaine dealer Brian Bragdon was convicted. He shot down two men at the outer point of a strip nightclub. He gave the argument of protecting himself against these men. The prosecutors, on the other hand, provided with a different argument. They maintain that Bragdon has no right to claim stand your ground and that too against these attempted charges of murder. This is because he falls in the category of convicted felons, and consequently shouldn’t possess a gun. There are two appellate courts of Florida which provided two different kind of judgment on the same issue. The apex court at Florida took the responsibility of resolving the case.

Stand Your Ground (SYG) law of Florida says that a person isn’t required legally to withdraw from anyone. He or she may use fatal force provided they have reasonable fear for death or high physical harm. There are some prosecutors who give the argument that the person cannot claim SYG if he or she was associated with any unlawful activity as signaled by a part of the same law. It was in place to prevent burglars from crying SYG after shooting the person whose home they were burglarizing.

The lawyer group desires to use this in the law arguing that felons that use guns shouldn’t posses the right for claiming SYG in defense. It is illegal for the felons use a gun and like any murdering burglar they are involved in an illegal activity. This legal issue concerns the unbiased interpretation of law. There is also an issue regarding the deprival of this right in convicted felons which is applicable on every citizen.

Background of the felon may not do much with regarding the case details that Brian is charged with. Higher court may provide the right to claim SYG to felons. However, even through someone like Brian is permitted by Florida Supreme Court to claim SYG, no judge or jury would buy it. In case the facts and evidences are equivalent to murder instead of self defense, he will face lifetime imprisonment.