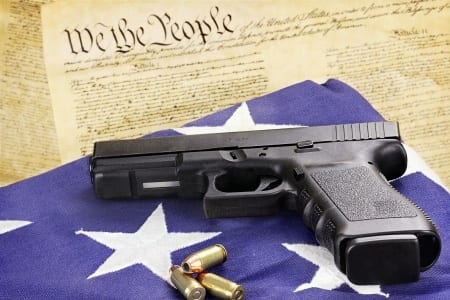 In the state of Texas, while it is legal to carry a firearm with a permit, it is also one of 5 states that do not currently allow ‘open-carry’. This is a controversial legal position, since Texas is a predominantly gun-owner, NRA-supportive, majority republican stance in which strongly stands behind the right to bare arms, the Second Amendment, or such a proposed carry law.

A current bill proposal by state Legislation, specifically Governor Greg Abbott, would reverse a nearly 140 year old ban in which prohibits individuals with or without a permit to openly expose a firearm in possession, per current handgun law.

This is a very controversial law, as individuals are becoming nervous to the idea of living in a “Wild West” like cowboy setting and raising their children around such a high-exposure of firearms and weapons.

Conversely, individuals, professionals, and researchers are encouraging the bill, as it would also intertwine with the potential for students and professors to open carry on campuses and in other public places. This increases safety, and in principal, will likely decrease crime, such as robberies, and potentially even mass-shootings such as that on university campus. This carry law would be readily available to, at least from a legislative stand point, and go into effect on both private and public universities. However, like government entities, arguably an institution could put into place requirements or ban the possession of weapons or open-carry on campuses to avert scare and irresponsible handling—though this would then be something in which could be fought in court and most likely won with the passing of said handgun law.

A Houston Republican State Representative Debbie Riddle argues that it’s a practical bill, and will not only deter crime but also strengthen society’s sense of obligation to second amendment rights.

According to C.J. Grisham, president and CEO of Open Carry Texas, individuals aren’t nearly as afraid of prison as they are getting shot. So in turn, he supports and implies that such a handgun law would again increase safety of both citizens at home and out or about in public. Arguably, though, some activists that are exercising said right such as open-carry of long rifles in places like Wal-Mart are creating a scare, making others uncomfortable, and sending a mixed message to other individuals—specifically those with children, or one’s whom do not carry a firearm themselves.

Such a carry law creates concerns, and is even generating strife amongst various advocacy groups. The future with this gun law is unknown, but most experts and politics are saying it’s more than not likely to go into effect by January 2016.