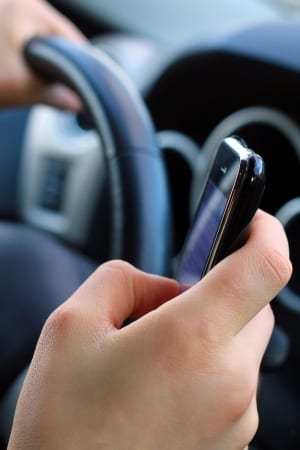 Texting and driving has undoubtedly been linked to hundreds of thousands of accidents per year, some leading to fatality.

Recently, Sarasota County, Florida Officers was interviewed and made the statement that texting drivers are comparable in performance to that of a drunk—or otherwise intoxicated driver.

While it’s easy to spot these drivers, it’s not always easy to follow up, or prove that they were in fact texting while driving—especially if other violations don’t exist per incident.

Ironically enough however, in places like Montgomery County, PA texting while driving laws are openly enforced, including by undercover units which will gladly issue said offender up to or more than $100.00 in fines, as well as potentially towing your vehicle and other reckless endangerment law violations.

According to researchers and scientists, the area in our brains associated with recognizing movements within the range of and surrounding the eyes as well as changes within an environment including colors (stop-lights) is deprived of at least 1/3 of its focus or energy when you’re texting and driving—that means you’re 1/3 more likely to get into an accident than had you not been texting and driving at all!

People feel overconfident in their ability to text and drive, or even drive with no hands, unfortunately all the way up until they risk harming themselves, or even worse, killing another person on accident.

Police in Sarasota County, Florida say that current Florida law pertaining to texting and driving can only be applied if and when a traffic violation or vehicle accident is combined with the burden of proof in demonstrating that an individual was in fact using his or her cell phone up until, or during the accident.

Defining legal liability is a huge obstacle for police officers, and the frequency in which they pull over teen’s and even adult’s texting while driving is extremely high.

One Sarasota County officer stated that he could easily issue 15-20 tickets per day in his county alone just based on drivers who are texting while driving. Unfortunately, it’s not very enforced by Florida law, so it’s considerably a waste of time and taxpayers money.

Although officers, specifically in Sarasota County are excited for the new Florida law to potentially come into effect into 2016, they’re fearful that they won’t be taken seriously enough, or that the law wont be quite as effective as they’d like.

In reality, in order to promote criminal recidivism, individuals would have to be charged with some pretty hefty fines or potential prison time to be deterred from an offense such as texting while driving—otherwise, it’s going to continue to remain prevalent, unfortunately.

As usual, state cohesion all across the board will be required to most effectively and aggressively tackle individuals who text and drive, to prevent accidents, and to penalize those that have caused them in doing so.

Police recommend drivers both remain smart, but also vigilant, and if you must text or make a call, just pull over—you might wind up getting pulled over anyway for being in violation of the law if you don’t.