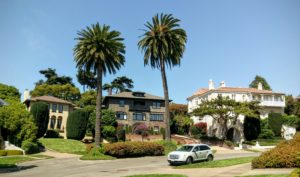 What consequences can lead to non-payment of taxes?

The people of San Francisco lost their street. It was sold at auction because of $ 994 in unpaid taxes.

Now the owners of real estate in the prestigious quarter are trying to challenge the deal.

A married couple of migrants Tina Lam and Michael Chen bought an online auction of one of the most expensive streets in San Francisco. This street is one of the 181 private streets of San Francisco, which homeowners have managed since 1905.

This was made possible by a mistake in the process of paying taxes. The details of the story told the portal Mercury News.
The street in the prestigious quarter of Presidio Terrace, the property in which belongs to prominent politicians and senators, was put up for auction in 2015. The city authorities did this because the locals did not pay tax for 30 years (about $ 14 per year).

As a result, the street went under the hammer for 90 thousand dollars. According to Tina Lam, at one time she came to the US with only one suitcase and now can not afford a house on the street, which now belongs to her. The new owners plan to make money not on reselling the street, but at collecting parking fees for 120 seats located on it.

In this case, the owners of real estate in the Presidio Terrace are trying to challenge the legality of the transaction. As it turned out, the tax invoices were mistakenly sent to the former representative of the association of local residents. The hearing on this issue will be held in October.