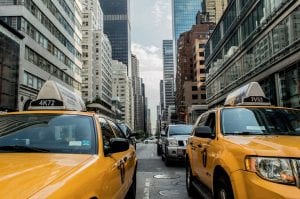 Taxi drivers (both municipal services and private ones), as well as their passengers in the front seat will now be required to wear seat belts. The new rule is provided by the law of the State of New York, signed on Tuesday by Governor Cuomo.

The document comes into force from November this year. “This is a security problem, and it is long overdue,” the Republican Martin Golden said on Monday. “Taxi drivers should do everything that others do. This saves lives and prevents injuries. ”

According to the law, “no person can drive a taxi if it is not fastened with a seat belt. No person aged 16 or older should be in the front seat of a taxi unless he is wearing a seat belt. ” Violators can be fined up to $ 100 for each incident.

Clarifications about whether the drivers are included in the new rule Uber and Lyft has not yet arrived. Martin Golden said that if they are not included, he will demand the adoption of another law that would cover companies engaged in joint travel.

The question remains of the use of seat belts by police officers. Supporters of the measure argue that this is correct, because patrolmen often travel at high speed, pursuing criminals or hurrying to a call. Opponents of the measure do not agree with this opinion, believing that the fastened belts will slow down the reaction rate of policemen and create inconvenience, because they are forced to often leave the car.